skip to main | skip to sidebar

Houston Center for Photography has a show on right now called "Magical Realism in Photography." It's one of the most interesting shows I've seen there in a long time.

Most people associate magical realism with literature, particularly with Latin American literature. But it seems that the term was actually first used in relation to visual art, in the 1920s in Germany. A German art critic named Franz Roh came up with the term, "Magischer Realismus," to describe the post-expressionist, hyper-realistic painting that was being done in Germany at the time by painters like George Grosz, Otto Dix, and Max Beckmann. The funny thing is that when you learn about these painters nowadays, they're usually introduced as part of a movement called The New Objectivity, or Neue Sachlichkeit in German. But these paintings are far from realistic in the normal sense of the term. Fantastic elements sit side by side with hyper-real, very sharply delineated painting of people and objects. For example, in this searing but satirical picture of some war veterans playing cards, their hideous war wounds and prostheses are painted with devastating clarity and sharpness, but the scene itself is not "realistic" in the sense that its perspective is distorted. 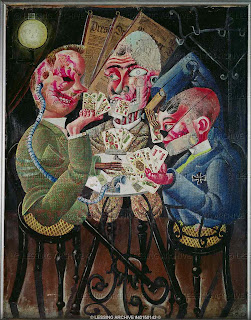 Neue Sachlichkeit grew out of the terrible violence of World War I and the meaningless slaughter of millions of men, along with the maiming of millions more. It seemed imperative to depict this horror in visual art, yet somehow without implying that the suffering was in any way ennobling or meaningful in a larger, heroic sense.

It's likely that magical realism in literature serves the same purpose: it's a way to depict the  true story of, say, colonialism in Latin America in a factual way, while also implying that this historical reality was so extreme that it violates one's normal expectations of how things will be. We live now in a time when new events are occurring that do not seem possible: American skyscrapers being brought down by Arabs in jets, European countries on the brink of declaring bankruptcy, humans changing the climate so that it will eventually revert to the climate of the earth in the time of the dinosaurs, the industrial revolution and Western "progress" coming to an end. Magical realism fits our need for a strong dose of reality coupled with a sense that this reality is somehow unbelievable.

Photography is a perfect medium for magical realism, as the photograph has a strong claim to being the most "real" representation of visual reality. Photographers have always manipulated negatives and prints to create fantastic scenes, even in the 19th century. Henry Peach Robinson was already using "combination printing" to create invented scenes from multiple negatives in 1858. 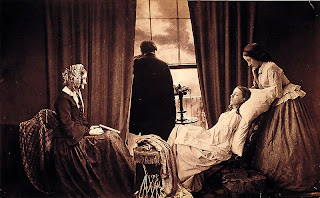 In the 1970s, I thought Jerry Uelsmann's photomontages were very cool: 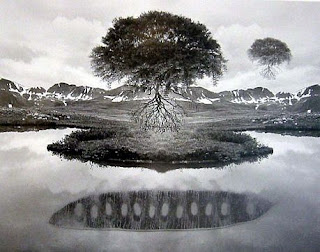 I've played with photomontage myself, using the Holga camera to superimpose exposures on top of one another in the negative: 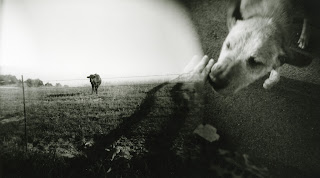 But the magical realism tool par excellence has to be Photoshop. The power is awesome. We can take any image, from anywhere, and put it in anything. The possibilities are so endless, and the process so relatively quick and easy compared to the way Uelsmann made his prints, that it's almost paralyzing. When you can do anything, what should you do?

This show has some answers. There were seven photographers represented in the show, and I hope to have time to write about more of them later, but the one who impressed me the most was Meghan Boody. She has done what I wanted to do when I first started playing with Photoshop: tell a magical realist story.

Boody's three enormous photographs in the show are from her series, The Lighthouse Project. This project imagines the story of a young orphan girl who escapes from confinement in the orphanage and goes out onto the heath, almost like Lear. It's not clear from the images exactly what happens, but the story seems to be a composite of many Victorian orphan stories, from Jane Eyre to Agnes Grey. ( I remember as a child being struck by how many English children's books involve children who are either orphaned or separated from parents by war: The Secret Garden, the Narnia stories, and many of Dickens's novels. It's an archetype that centuries of war and turmoil have seared into European brains, apparently.)  There are fifteen photographs in the whole series, and they are composed like history paintings: huge set pieces with many costumed characters and elaborate sets. Boody photographs the people--often young girls--in her studio, and then she places them digitally in the gorgeous landscapes and great manor houses that she photographs separately. 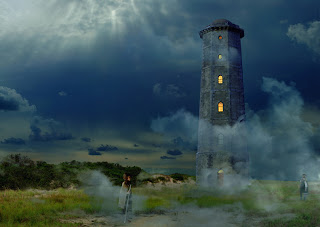 Not all of the photographs include overtly magical elements. There's one that has a ghostly figure of a woman gazing out from a doorway. But most of the images are not in the realm of the paranormal. The sense of magical realism--"this is real/this couldn't be real"-- comes, I think, from the fact that we seem to be seeing actual scenes from the 19th century, apparently photographed with incredible fidelity and sharpness, but they're in color! And they're really big! (The biggest photographs of the 19th century were only 20x24, and they were virtually all black and white.)  It's as if Thomas Struth had been teleported back to 19th century rural England with an 8x10 view camera and a scanner (or a high-end digital Hasselblad), and a Fujiflex Crystal Archive ultra-wide digital enlarger. The medium appears to be partly 19th century, possibly using a large-format film camera, and partly 21st century, since these huge color photographs could only have been produced by modern high tech digital printing. This juxtaposition and blending of technologies from different centuries creates a confusing, yet pleasurable sense of real-but-impossible.

The huge photographs--50 by 70.5 inches--reward a lot of careful looking. The details in the ground--the grass and rocks--are amazingly sharp, hyper-real, as befits magical realism.  They are gorgeously colored and composed. There is much pure visual pleasure in them, as well as the frisson of suspense and dread that seems to permeate the story. The viewer--I almost wrote "the reader"--is forced to invent the in-between scenes of this "movie" or novel. It's as if you received a beautifully illustrated book for Christmas, with fifteen color plate illustrations in it, and you paged through the book looking at the illustrations, imagining what the story might be before you get to read it. Only you never get to read it: you have to make it up.

Actually, the story seems to end with "to be continued." We see the young girl, now sixteen, in the last picture, standing against a wall in a fancy drawing room. She and the girls next to her are plainly dressed, whereas the foreground people are richly dressed. It's as if she's a servant in somebody else's household, much like Jane Eyre.  Will she ever marry the rich heir to the estate? Or will she get pregnant by him and be cast off, sent back on the road, as if in some tragic George Eliot novel? Magical realism doesn't lend itself to easy, Regency novel-style resolution. Like real life, it's too strange for that. 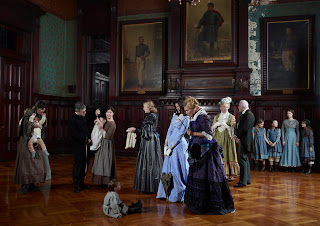 Posted by shannonstoney at 8:48 AM